A dedicated group of retired nurses volunteer their time to maintain historical information and items as well as coordinating display cases highlighting the rich history of care at Quinte Health Belleville General Hospital.  Look for the display cases, just inside the Sills Wing to the right and enjoy the historical displays. 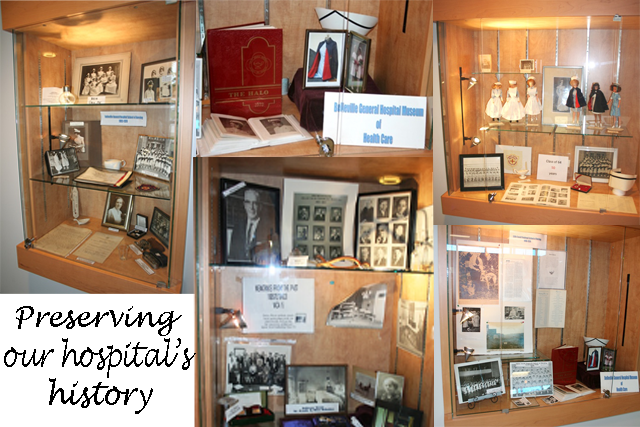 The BGH School of Nursing had their first class graduates in 1895.  There were five nurses.  The classes became larger as years went by; some having as many as 40 in a class.  BGH’s last nursing class graduated in 1970.   Nursing education was a three year program.  In the beginning, the doctors gave many of the lectures to the nurses.

As early as 1927, nursing students worked (12 hours a day; 10 hours of practical and 2 hours of theory) six days a week.  Along with regular chores of nursing, the students also cooked their meals while on duty and washed laundry for the maternity floor.  They received 8 to 10 dollars per month for their efforts.  If you broke an instrument, for example, like a thermometer, you paid for it out of your own pocket.

There were two residences on the hospital property where the students lived.  The Ritchie Residence and the Mary Ritchie which were demolished around 1972 when the Edith Cavell Residence was built.  The student’s uniform changed through the years from wearing starched bibs, collar, and aprons to a one piece uniform, but the nurse’s cap remained the same-a symbol of a registered nurse and a graduate of Belleville General Hospital.

Hospitals were becoming more plentiful.  There was Trenton, Picton, Campbellford, Napanee and the demand for nurses was growing.  They needed a system of training that could be counted on to give an adequate supply of nurses for surrounding hospitals.  Thus in 1968, the first class of Edith Cavell Regional School of Nursing was admitted for the fall term and 41 applicants were received.  It was a three year program but in the third year the students did their last six months internship at one of the above area hospitals.  In 1974, the last class of Edith Cavell, which was now only a two year program finished its second year at Loyalist College.  Edith Cavell is now phased out and nursing has moved on to colleges and university.

Many of the BGH Nursing graduates became nursing sisters when they joined up with Canadian Troops during the first and second World Wars.

The Nurse’s Alumni Association was started in 1919 and still continues today.  An annual alumni dinner is a tradition that is carried on the last Friday in May for all BGH and Edith Cavell graduates.  They come from all over Canada to join up with their fellow graduates and to remember the old times.  An annual bulletin is sent out to members with news items.  The BGH Museum of Health Care archive resides in the hospital and items contained within it are displayed in glass show cases in the Sills Wing.